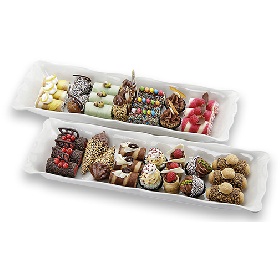 Wafers ready to be filled

The careful selection of ingredients ensures a higher quality. 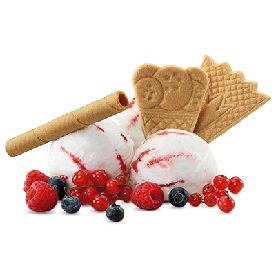 A complete variety of wafers to decorate ice creams and dessert: from classic rolled wafers to the

more imaginative and modern ones, suggested in the classic flavours like vanilla and cocoa, in

the latest trends spice and fruit-flavoured, in a choice of colours, in different shapes and sizes.

Crispy and tasty wafers, thanks to strictly natural ingredients, the absence of preservatives in the

respect of the traditional recipes. 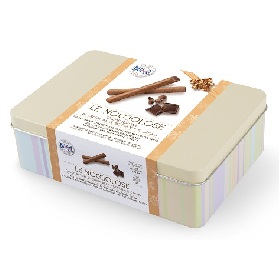 Wafers ready to be taken away

The proposal of sweet gelatowafers, all packed in handy and original packagings. From the now

classic “Le Cialdissime” to the new “Vintage” tins to be collected, in addition to the cream filled

wafers, packed in handy single portions, to be offered in nice counter displays. 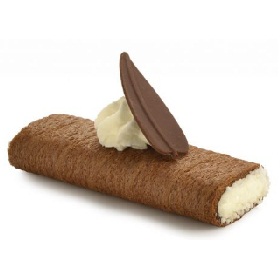 Purpurry: a Sweet World of Decorations

In 2013, Bussy chose to make its main business a rich array of items for enhancing desserts and ice creams. The items are in part produced directly by

the company, in part selected following Bussy’s philosophy. A complete range for pastry bakeries, gelaterias and bakeries, with a choose of a multitude

Purpurry, a sweet world of colours and flavours

An History made of Wafers

Luigi Vandone is still a young pastry chef in

Milan when he decides to buy the company

The wafer cannolo is made for the first time.

It is an original product that Luigi Vandone

wants to market to pastry bakeries and ice

cream shops as a “semifinished” product for

It meets with unexpected commercial success,

paving the way for the structural changes needed

as the product is still made by hand.

Production of the Bussy Cannolo, referred to

thanks to the installation of a custom

machine made in Austria capable of meeting

the higher demand. The name Bussy

frequently comes up in conversation among

operators who meet annually at SIGEP in

Rimini, a fair the company has always attended.

Bussy consolidates its position as a wafer

specialist not only for the Italian market but

also for foreign markets, starting in

German-speaking countries and the north of Europe.

The market looks for something new and this leads

to the idea of a variegated two-tone wafer that Bussy

immediately begins to make at its facilities in Rho,

in the Milan suburbs, at the company’s new premises.

It is time to come up with a new product and

that product is called Kikera, a wafer cup,

plain or covered with different types of

sprinkles. The Bussy catalogue has gradually

grown to include a wider choice of original

The increase in production lines and items in

the catalogue requires expansion of the

facility, an office and storeroom building are

This is the year of epic transformation: Bussy

goes from production by hand to an

Bussy, it is the culmination of almost 30 years

in business and a commercial strategy that

parlours that make their own products

in-house, but that also impacts the food

In 1988, the youngest daughter of Luigi,

Vittoria Vandone, takes over at the helm of

the company. Thanks to her studies in

economics and finance, Vittoria notices a

further, new driving opportunity for the

and pushes forward on markets that are still

new: from Australia to Arab countries, it

begins to attend fairs in other countries,

The Purpurry catalogue dedicated to

who want products for decoration, not just

limited to wafers. Bussy is confirmed as the

leading company in this sector.

fairs, some of which are in other countries,

for the first time.

Bussy’s commitment to marketing and

coordinated image is rewarded when it wins

the Premio Comunicando award in the

has been awarded for 9 years by a leading

editorial company in the industry, Editrade.

At Sigep in Rimini, Bussy takes a further step

and receives the Premio Comunicando

This is the second time it wins the Grand Prize,

the first being for an effective marketing campaign in 2010.

It was 1967 when Luigi Vandone decided to

take over and develop a production of

wafers for cakes and gelato in Milan, Italy.

Thanks to the passion, the courage, the

determination and love of the Vandone

family the company celebrates its first 50

is the new “face” of Bussy!  She will be working

both sweet and savoury, using the brand’s